A magazine for friends of the Warren Alpert Medical School of Brown University.
You are at:Home»Articles»A People Without A Country

Two faculty members find themselves in the midst of the worst humanitarian crisis in the world: among the displaced Rohingya in Bangladesh.

Although the line is long with people waiting to see the doctor, there are no complaints. Headaches, fevers,
diarrhea, skin rashes—the usual primary care issues. I have participated in many of these clinics: in western Kenya, where I have worked for 20 years, and as part of the Travelers Aid medical van at home in Providence. Here, I am helping out at station no. 1, where we take height and weight. A young boy about 10 is in line and I ask through the interpreter what is his concern. He has a headache and points to a spot above his right ear. We take off his headscarf. It is a bullet wound tracing from his scalp and back across his head, and the upper part of his ear is missing. The wound is festering. That’s when I remember: this is the Rohingya camp in Kutupalong, outside of Cox’s Bazar, Bangladesh.

I received an email from Ruhul Abid in July 2017, asking me to attend a presentation on tuberculosis that his NGO, HAEFA (Health and Education for All), was making to the USAID mission in Bangladesh. The HAEFA project combined noncommunicable disease and tuberculosis screening efforts for factory workers and rickshaw pullers in Dhaka, Bangladesh.

Although Abid and I are both on the faculty at the Warren Alpert Medical School, our paths had never crossed until that email. Abid is in the cardiothoracic surgery department, where he studies the mechanisms to improve heart function after myocardial infarction (heart attack). I am part of the pulmonary division, concentrating on TB and the Brown Kenya Medical Exchange Program, with an office at The Miriam Hospital. The TB community is small and I wondered why I had never run into Abid previously. That email, which finally brought us together, was to take me on a remarkable journey.

In 2012, Abid saw a television report about a ready-made garment factory building in Bangladesh that collapsed and killed a large number of workers. A native of Bangladesh, with family still there, he decided to found HAEFA. Using his previous experience as a primary care physician in the tea plantations, he designed a plan to screen and link factory workers for common noncommunicable diseases: diabetes, hypertension, COPD, malnutrition, and preeclampsia. TB is also common in Bangladesh, but highly stigmatized. Abid added TB screening to his program, hypothesizing that linking TB with common diseases would reduce stigma.

Working in clothing factories in Dhaka is difficult; the emphasis is on productivity, not workers’ rights. To negotiate with employers, HAEFA had to guarantee it wouldn’t disrupt productivity levels. The entire interaction with the worker occurs within seven minutes. The HAEFA model became a series of four stations: registration; height and weight; blood pressure and finger stick for blood sugar and hemoglobin analyses; and physician examination, including TB screening questions. Information at each station is collected on an Android tablet in a prescribed format (think electronic medical record) and each patient has a unique identifier and bar-coded ID card. Patients who need followup care are linked to existing services in the community. HAEFA’s initial work in 2016, funded through the UK’s Department for International Development and Brown University’s Global Health Initiative, screened 5,776 factory workers and 1,200 rickshaw pullers in Bangladesh.

Last July the area south of Cox’s Bazar, known as Ukhiya, was mostly forestland, the hills covered by trees. But since August, 650,000 Rohingya from Myanmar have crossed over the Naf River to reach Ukhiya, and the Bangladesh government has designated the area as a campsite and has assisted in bulldozing the forest, setting up temporary shelters, building streets, providing food and water delivery, and coordinating international relief efforts.

Today the trees have been replaced by canvas and bamboo huts as far as the eye can see. The pit toilets fill within days. Water holes have been drilled in central areas. Long lines, separated by gender, await the food trucked in by relief organizations. Aid workers must leave each day at 5 p.m., when the Bangladesh army sweeps through to close the camp down, for security purposes. An informal economy has grown on the edges of the camp, selling groceries and small personal items. The roads are filled with supply trucks, as well as politicians—international and local—visiting the area.

Early in the crisis, HAEFA recognized both the need—as well as the applicability—of their model in the camp. Through Abid’s contacts in Bangladesh, HAEFA asked the offices of the Directorate General of Health Services and the regional governor to set up two medical centers in the camps. The NGO got permission to set up their camps in conjunction with the government camps. And this is how, in November, we came to be standing in the middle of the largest humanitarian crisis in the world today.

During our visit, HAEFA’s two eight-member teams had been working in the Kutupalong and Balukhali camps for just over a month. There are several medical camps, set up by the government and by multiple NGOs. The HAEFA model is much as it was in the clothing factories. Patients visit a series of stations, where health care workers record information on handheld tablets. Each patient receives a laminated ID card so that when they return, the card can be swiped for record retrieval. By the time the patient sees the physician their electronic record is populated, with a red exclamation point flagging any abnormalities. A solar panel outside the medical tent feeds the battery that runs the computers and the Wi-Fi router that connect all the tablets, for smooth synchronization of the data; each evening the data are backed up to HAEFA’s remote database. A local female health care worker fluent in both Bangla and Rohingya interprets for the doctor. Meanwhile, in the middle of the chaos, every physician takes the time to touch each patient. It’s a principle instilled by Abid: even if it’s just a finger on a pulse or a stethoscope on a chest, every physical exam employs human touch. 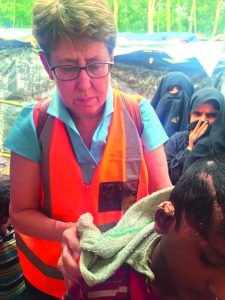 The line at HAEFA is at least five times longer than at other medical camps. The group sees 200 to 300 patients per day, working until the army closes the camp at dusk. But no one complains to us about the wait. We think HAEFA draws more patients for three reasons: they see the technology we’re using and receive a photo ID; they perceive the systematic approach to the evaluation, including blood pressure monitoring and glucose testing; and our physical exams include human touch.

These are not the best of conditions. There are overflowing pit latrines behind the HAEFA medical camp in Kutupalong. On day one of our visit, the heat and the stench were overwhelming; but the lines remained and the work went on. On day three it rained, and the water mingled with sewage and flowed down the street. In Balukhali, where the HAEFA camp is located in a valley near the base of a hill, the medical tent partially flooded. The physicians were drenched in sweat, with no place to take a break—to get a cup of coffee or glass of water. Yet the line of patients continued to move.

In addition to on-site treatment, HAEFA has established referral systems within the camp: for sexual violence victims, for diagnosis and treatment of TB, for safe delivery of pregnant women, for treatment of severe malnutrition, and for hospitalization for serious illnesses. Female health workers escort women identified in need by HAEFA; victims of sexual violence can be brought to woman-friendly spaces and trauma centers set up by UN agencies while pregnant women are taken to adjacent maternity and delivery centers operated by the UN Population Fund (UNFPA), and malnourished children and women are escorted to the centers run by the World Food Programme. Although all these resources exist in the camp, they were established by independent agencies and in many cases don’t effectively connect patients with the services they need.

For example, TB thrives in this type of environment; overcrowding and malnutrition drive TB epidemics. Initially HAEFA referred TB patients to the government screening center, but it turned out to be a 15-minute drive away, and none of the patients had transportation. After Abid’s visit in December, HAEFA established a collaboration with the National Tuberculosis Control Program of Bangladesh and BRAC, a Bangladesh-based NGO, for diagnosis and treatment of TB. BRAC staff members are stationed in the HAEFA camps in Kutupalong and Balukhali to collect and carry sputum of presumptive TB cases to a nearby microscopy lab. HAEFA then records the lab reports in its database—and patients don’t have to travel a long distance for sputum microscopy.

As an emergency measure, the government of Bangladesh has taken on responsibility to loosely organize the camps since August 2017. HAEFA is providing care in conjunction with the Ministry of Health and Family Welfare. We saw many organizations on site—the World Food Programme, UN agencies, Doctors Without Borders, and the government of Turkey, to name a few. Major logistical challenges face the goodwill of the donors.

But what the Rohingya need is an effective health care system. In the immediate emergency response, the priority was providing the basics: food, shelter, water, safety. As time passes, the focus must shift to building the health care system—as well as providing access to jobs and schooling. Following our visit in November, we demonstrated to the UN Population Fund how HAEFA used handheld tablets to collect and organize health care records in the camps. The head of UNFPA arranged a presentation the following week to link HAEFA’s system to reproductive health care providers throughout the camp. Other caregivers also need to link their patients to the appropriate facilities. These connections are only now emerging, with HAEFA leading as a “linkage builder.”

The Bangladesh government has been doing excellent work by supplying shelter, food, and health care, including vaccines. Between 70 and 80 percent of t he people in the camps are women and children, including around 32,000 pregnant women and 100,000 children between 1 and 4 years of age. They were deprived of any systematic health care or immunizations since Burma took their citizenship away in 1982 (see sidebar). In September, after reports of polio and measles in the camps, the Bangladesh government promptly provided emergency vaccines, including cholera. But a recent outbreak of diphtheria, which infected more than 3,000 people and has already claimed 30 lives, points to the vulnerability of this population.

On the signs at the camps, the Rohingya are called “Forcibly Displaced Myanmar Nationals.” But are they Myanmar nationals? Their home country doesn’t seem to want them back. Are they refugees—never expected to return to Myanmar, but to find a new homeland? Will they be moved to an island in Bangladesh, as has been proposed, where again they will wait for political recognition and basic human rights?

These larger questions loom. For now, we are physicians. We can provide care and logistics. For now, that is the best we can provide.

HAEFA is a US-registered 501(c)3 nonprofit organization and solely dependent on fundraising to support their continued services in the Rohingya camps.